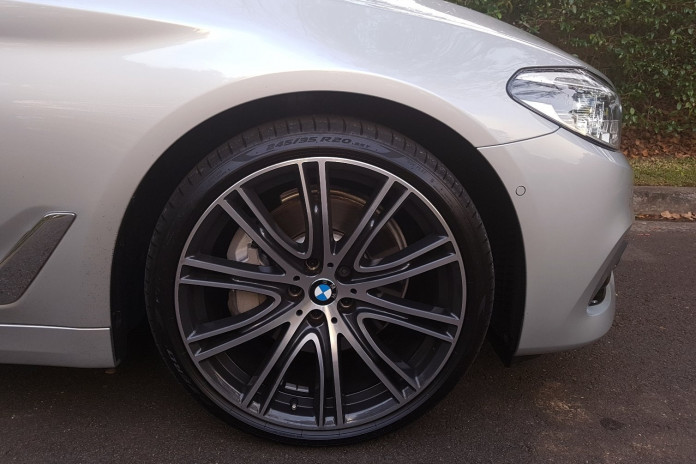 LET us take you on a journey, a short but very interesting journey. We go back to the early 1960s for a little history lesson. It was at that time that the BMW 1500, the BMW 1800 and the BMW 2000 entered the market as the ‘New Range’.

Those three models would establish the most successful model series BMW had ever seen up to that point.

The competence in the development and production of saloons demonstrated by BMW with these models gave the brand a worldwide breakthrough as a manufacturer of modern and highly desirable automobiles with very individual characteristics.

Fast forward about 10 years, and the switch from the ‘New Range’ to the BMW 5 Series in 1972, when BMW introduced not only new nomenclature, but also a new era in design.

Indeed, the number ‘5’ immediately became the synonym for unmistakable driving pleasure in this segment.

The model number introduced benchmarks that include a four door notch back body, engines fitted lengthwise at the front, rear wheel drive and an elaborate suspension, as well as incredible technological innovation.

Since its beginnings, the BMW 5 Series has stood for sedans which, through their design, offer particularly harmonious balance of sportiness and elegance, authentically reflecting a unique combination of driving dynamics and motoring comfort through superior drive train and suspension technology.

Enter the 2017 BMW 530i Luxury Line. The latest incarnation in a model series that has sold more than 5.5 million cars globally since its inception. A car that not surprisingly gets people talking about the technology it offers.

Here ends the history lesson by the way. Let’s shift the focus to the astoundingly good new model, and its incredible technology that includes the new BMW display key (which we’ll explain shortly).

BMW has long since bid farewell to the classic BMW 3.0 straight six, with the new 530i powered by the B46 turbo charged 2.0 litre inline four (which also appears in the 330i, the X1 and the MINI Cooper S).

Developing 185kW/350Nm, it will propel the 1,540kg four door to 100km/h in 6.2 seconds. The 530i exhibits almost zero turbo lag, and throttle response is natural and immediate, both off the line and in higher speed passing manoeuvres.

The B46 produces just a smidge more power and less torque than the previous N20 turbo four, but the new 5 series feels notably quicker, thanks to extensive use of aluminium in the boot, doors, and suspension, combined with other mass reduction efforts.

The 8-speed automatic transmission (the only gearbox available, sorry manual fans) is fast and responsive, and pairs well with the miserly power plant for decent fuel economy. Expect your fuel numbers to dip though if you do a lot of spirited or city driving.

As it should be, the drive train is rear wheel drive, with the increasingly popular option of all wheel drive (or xDrive, as BMW calls it) available across the range.

We’re thinking the whole ‘the numbers in the name matches the engine size’ thing is completely out the window now, right?

Fitted to our car was a tasty set of sportier 19-inch alloys, and the BMW Innovations Package, which adds gesture controls for the infotainment system, remote control parking, ceramic interior bits, glass sunroof, and metallic paint.

Also included are some of the more impressive features from the 7 Series, such as parking assistant plus, which uses surround view cameras and parking sensors to create a 3D image of the car to improve parking precision.

The new 5 Series features the sixth generation of the iDrive control interface, a huge step forward that now provides improved voice recognition, particularly handy for not having to wind the dial when setting a destination into the SatNav.

That gesture control thing we mentioned earlier is part of the new iDrive platform, which lets you wave your fingers around like a madman in the middle of the cabin to make things happen on the screen.

It’s a great party trick the first time you swirl your finger to the right and raise the volume to the surprise of your passengers, but for now we’d save the nearly $200 novelty and live without it.

The new display key, that’s a different story. Think of it as the key to your car, with the addition of an interactive video screen, on the actual key, providing basic functions like the security status of your vehicle.

We’re not just talking is the car locked here, you can see if the doors and boot are locked and if the alarm system sensors are on, and if the windows are up or down (or if the kids have escaped after you locked them in the car – we jest of course, no really).

Pretty cool right? Well it gets better! You can also check engine oil, vehicle check and brake fluid status, show a fuel gauge and range, and even see what lights are on or off, as well as set a time for the car to precondition the cabin to the right temperature.

We’re not done with the display key yet though, because we’ve left the coolest feature to last – remote control parking. We mentioned it a little earlier but you will have simply skipped over it thinking it’s a typo.

It’s not, you can remote park your shiny new BMW 530i, with the key, in forward or reverse (sorry this isn’t a James Bond movie, and Q doesn’t work for BMW). Super useful for getting in and out of tight car spaces (and it freaks people out).

Featuring a longer, lower stance, and a design clearly inspired by the new 7 Series, our 530i Luxury Line was finished in the somewhat executive and pedestrian Glacier Silver, but a host of cooler colours are available.

Inside though, the package is cohesive, sumptuous, and ultimately awesome, with a sweeping dashboard design to make the extremely wide infotainment screen look less like a tacked on iPad and more like a futuristic command centre.

Don’t do this car’s interior a disservice by choosing black either, as the detailing begs for a lighter colour to really stand out. On the downside though, the matte wood finish is handsome to look at but feels cheap to the touch.

In the 530i we test drove were optional cross stitched and perforated leather seats for that added touch of class, and changing ambient lighting, which makes for a crowd pleasing light show at night.

Rear seat passengers will find comfortable enough seating, and with sunshades on the rear glass and side windows, will enjoy a near high end experience, but taller occupants will be pressed for leg room thanks to the thick backs of the top tier front seats.

Overall though, the new 530i is, as expected, a big step forward. The new semi autonomous driving features, a luxurious interior that hits the spot, and all the usual BMW markers of handy chassis and strong drive train, keep true to the brand.

Our road test vehicle was supplied by BMW Australia. To find out more about the 2017 BMW 530i, contact your local BMW dealer.