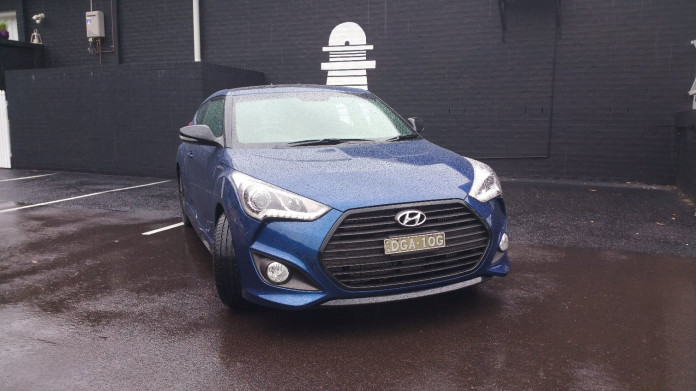 IT comes in just one colour – Dazzling Blue. That’s it, no other choices. Just a funky blue colour, with Phantom Black inserts everywhere. But it’s also a special edition, with astounding street appeal.

Hence the name Hyundai has branded it with – the 2016 Hyundai Veloster Street. It’s the sportiest a Veloster has ever looked, and some nice improvements inside and out add to that look and feel.

We’d even go so far as to say the Hyundai Veloster Street is the car you buy when you can’t or don’t want to do exterior mods yourself. Hyundai have done a nice job with this car, and dare we say it, it’s better than some after-market jobs. Controversial we know.

This sporty little coupe is based on the outgoing SR+ and has had quite a few little bits bolted on to it, and some other things improved. We’re especially fond of the switch from silver to aggressive black, it makes for a no nonsense looking quasi sports car.

Those Phantom Black inserts we mentioned earlier include side skirts, rear diffuser, front spoiler, grill surround, side mirror covers and the rear roof spoiler. It drags a few things from the SR+ too that we like.

A panoramic sun roof, 7-inch touch screen display with SatNav, key less entry and climate control all feature here. It’s a pretty decent bag of tricks for a $35,000 car – that’s the 6-speed manual mind you, the 7-speed dual clutch auto is just under $38,000.

What you don’t get though is Apple CarPlay (which is in the next generation Series II Veloster but not found here), or any other decent phone tech that you might expect to find in what is essentially the top of the range, given the price.

It’s flashy inside though, there’s blue coloured inserts everywhere; in the seats, the doors, the seat belts, and the unique handle bars that grace the centre console. But lets face it, the Veloster has a ‘look’ all its own.

The seats are very comfortable though and realistically if they hold you nicely on corners and feel comfortable on highway drives, as well as the city commute, we could live with the funky coloured inserts.

If the price seems a bit much to pay for a Veloster, consider what you get for the money. You get 18-inch RAYS Gram Lights alloy wheels, Xenon headlights, “Street” badging on the front guards and inserts, and all the toys from the SR+ we mentioned earlier.

The power plant in this car is the same 1.6-litre turbo that is found across the Veloster range, and pumps out a very respectable 150kW of power and 265Nm of torque. Coupled with the sporty feeling of the 6-speed we drove, the car is quick and responsive.

The suspension has also be carried over from the rest of the Veloster family, but that’s a good thing, and it’s locally tuned too. The car behaves “playfully” according to the general manager of engineering at Hyundai, Hee Loong Wong.

We agree, and it’s that fact that also provides the car with far better handling for high speed cornering, as well as low speed comfort. Something else to consider is that this car can run quite happily on 91 RON fuel, and doesn’t need 98 to play properly.

The prices we’ve provided are plus on-roads, but is it value for money? Well, we reckon it’s pretty well put together, and offers a real sports car feel. So living with the 2016 Hyundai Veloster Street would be pretty sweet.

Our test vehicle was provided by Hyundai Australia. To find out more about the 2016 Hyundai Veloster Street, contact your local Hyundai dealer.