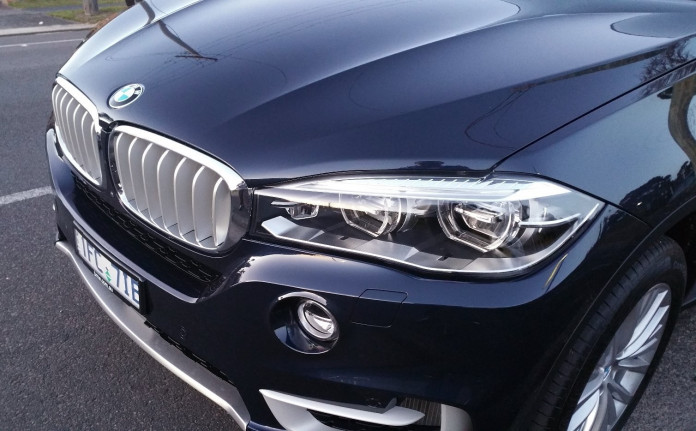 THE 2016 BMW X5 xDrive40e is a revelation, a luxury SUV that’s also a plugin hybrid – that’s exactly same price as the diesel version of the same model – and it might just be the best plugin hybrid on the market today.

That’s a huge call, we know, but this thing is genuinely fun to drive, delivers luxury everywhere, is filled with cutting edge technology, is hugely economical for an SUV, and from a styling perspective, is the best looking X5 ever built.

The X5 xDrive40e is part of the iPerformance range, and is in essence the luxury SUV flagship of that range (which also includes the micro-sized i3 and the wicked i8 sports sedan). It captures everything that BMW has poured into the iPerformance vehicle concept – environmentally friendly technology loaded vehicles that embrace the future of motoring.

When the battery is fully charged it will give you around 30km of pure electric driving, but while that sounds like nothing (and in a number of cases it was – more on that later), remember this is a hybrid, you’re generally not doing pure electrical driving, and it comes with kinetic recharging (so it charges when you brake or lift off the gas – but you’ll need to drive it like you stole it to truly extol the virtues of the active charging system – call it enforced charging if you will).

BMW rationalises the hybrid settings into a ‘what works best’ kind of scenario – covering urban, day-to-day and long distance driving, each with their own best set of options, and varying fuel economies and performances.

On a practical level it looks a little something like this. For urban driving, short distances can be driven in full electric mode, while hybrid mode should see an incredible 3.3 l/100km – we managed a 3.6 in what we would class as urban driving, but it included some traffic (trip was from NSW Central Coast to Macquarie Park in Sydney – a good reflection of an urban scenario).

Inner city driving is pretty damned impressive too. In full blown traffic from Parramatta to the Airport, we saw outstanding figures of 6.5l/100km – right on the money with BMW’s claimed figure of the same economy.

The company claims a genuine range of 830km on long distance driving trips, which is phenomenal and class leading. We tried it out. We didn’t manage that number but about 802km, it was still exceptional and impressive. Very impressive.

With an 8-speed automatic transmission (with the pretty much standard everywhere paddle shifters) butted up to 2-litre 4-cylinder turbo petrol engine pushing out 180kW of power and 350Nm of torque (along with an electric motor pumping an additional 83kW and 250Nm for a total output of 230kW and 450Nm.

Imagine this if you will. You are always connected to your BMW, with eDrive services (which includes BMW remote services). Think of it as being able to control your car with your phone, including remote locking and monitoring of hybrid efficiency, battery power and remote charging (including finding suitable charging stations should you need one).

The system is more capable than that though. It gives you the ability to get into a comfortably cool car in summer and a warm car with clear windows in winter. Thanks to an electrical refrigerant compressor and a tank-less electrical heater, the automatic air conditioning functions almost silently, even when the engine is off – all of which can be set to come on half an hour before you get in the car (charge dependent).

There are someone genuine nice touches with the X5, from the night time projection of an X5 outline on the ground (similar to the logo projections from the likes of MINI, Tesla, Genesis and Jaguar), to the boot-lip tailgate that gives an old school wagon feel to what is a truly styling, modern vehicle.

The downsides to the X5 xDrive40e are definitely there too, but there’s not as many as you might think. Things like the odd feeling that the car is weighted not quite right in cornering, the result of battery distribution, and the painfulness that could be plugging it into a power point every night to charge it all spring to mind.

There’s also no seven seat option, making it a limited choice for the bigger family (where a rival plug and play hybrid like the Volvo XC90 comes standard as a seven seater) – but that said, it’s definitely family friendly for your average two adults and two munchkins sized family.

The ChargePoint network is available for location charging around the countryside too, but let’s face it, the Aussie charging network sucks hard (Tesla anyone), at least thus far, and while different providers pull the EV race in different directions – it’s a fight that seems set to continue for eons to come.

Not really the car’s fault that we as a country can’t get it together in terms of EV and hydrogen fuel cell technology, but it does hurt the consumer who wants to maximise the capabilities of the system on offer.

There’s also 10 different sets of alloy wheels (some 19-inch but mostly 20-inch) to choose from, 13 different leather interior/upholstery combinations, and nine different trims for all the nice touchy feely bits throughout the interior. Oh and there’s a bunch of enhancement packages too, designed to make your X5 uniquely yours.

Our test vehicle was supplied by BMW Australia. To find out more about the 2016 BMW X5 xDrive40e, contact your local BMW dealer.