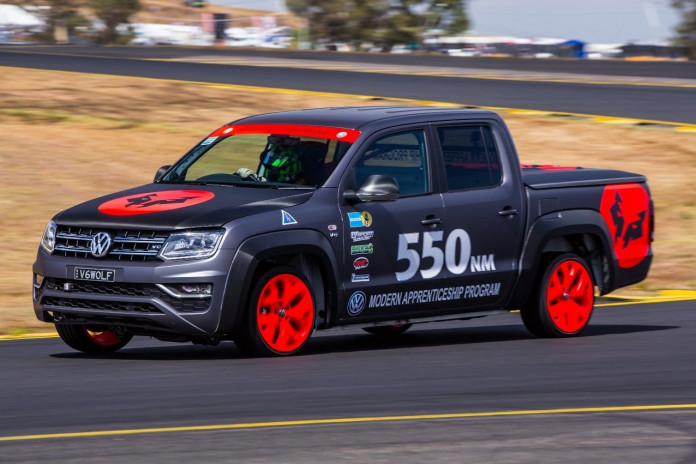 APPRENTICES from Volkswagen Australia claimed a special victory at the World Time Attack Challenge at Sydney Motorsport Park over the weekend, beating the 1m 59sec challenge set by the iconic Golf GTI hot hatch, in a modified V6 Amarok ute of their own construction.

Working with a team of mentors from Volkswagen and its supplier network, the team stripped the Amarok of weight, added a custom-built suspension package dubbed ‘The Big Bad Wolf’ by engineers at Bilstein; and fitted an AP Racing brake setup in collaboration with V-Sport technicians.

When the vehicle was track-ready, it was wrapped in custom vinyl, laid by Shane’s Signs, and fitted with a set of semi-slick Michelin tyres. The Amarok’s award-winning power plant, which boasts 165kW of power (180kW on overboost), and 550Nm of torque, was left as standard: proof of its track-blazing credentials.

The national apprentice team was on-hand at the WTAC, presenting the ute to the eager crowd of motor sport fans, and to get their concept car ready for its four high-speed track sessions on the Friday and Saturday.

Working with the project mentors from Volkswagen Australia and its supplier network, the team took feedback from the Amarok’s pilot, race driver Ben Porter.

Throughout the weekend, Porter took the modified Amarok through its paces, first meeting the challenge’s 1m 59sec lap time set by the stock Golf GTI and then, beating the time altogether. The team of apprentices, mentors, technicians and Volkswagen staff were ecstatic when the Amarok V6 crossed the finish line with a best lap time of 1m 57.01sec.

Director of Volkswagen Commercial Vehicles Australia, Carlos Santos said: “We’re enormously proud of our Amarok V6, which we’ve always seen as the leader of the pack in terms of power.

“Thanks to this incredible team of Volkswagen apprentices, we’ve been able to show just how much power is under the hood of the Amarok – 550Nm is great for towing a boat or caravan; and now we can add smashing lap times to that list.”

Project lead, PR and Brand Experience Manager, Kurt McGuiness added: “It’s fantastic that this team of young apprentices not only met the challenge head-on, but far surpassed it on the track,” Mr McGuiness said.

“It’s important for us at Volkswagen to offer unique learning experiences to our apprentices. Our Big Bad Wolf Amarok track car is not only an example of our superior engineering, it’s also a way for us as a business to support the lifeblood of our industry in Australia.”

With history made, thoughts have turned to next year’s challenge – perhaps the next class of apprentices will square off against the 213kW AWD Golf R at Eastern Creek?