Another day, another battle 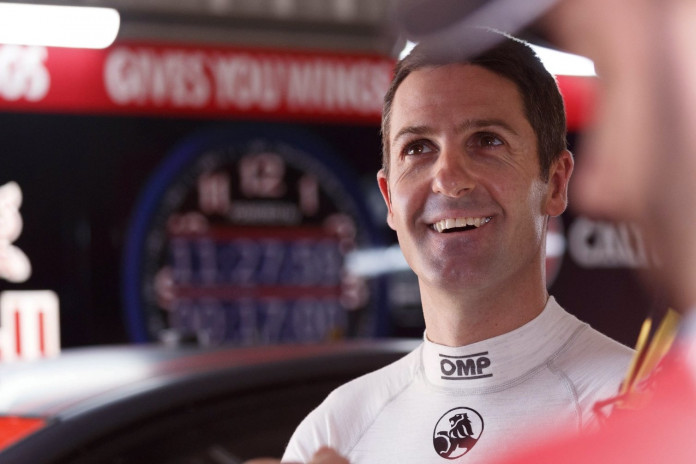 AFTER yesterday’s hotly contested affair, all eyes were on the battle between Shane van Gisbergen and Scott McLaughlin in today’s racing action at Sydney Motorsport Park, but it was Jamie Whincup who became the most capped driver in Supercars’ history, taking out the 106th win of his career.

Whincup claimed his second win of the season in convincing style with nearly 10 seconds back to the battle pack behind him, with DJR Team Penske’s Fabian Coulthard second ahead of Shane van Gisbergen and Scott McLaughlin.

“The number doesn’t mean much. It’s great to get another win and they’ve been few and far between this year. At the moment, I’m just trying to win as many races as I can,” Whincup said.  “I’m not out there to tick boxes. I’m out there to race hard and have fun. The battles that are going on out there this weekend are up there with the best I’ve had.”

Van Gisbergen looked like he would make it a Red Bull Holden 1-2 but was caught by DJRTP rivals Coulthard and McLaughlin, who denied him second place and forced him to make his #97 Commodore as wide as possible to retain a spot on the podium.

“It was a good race. The whole race was pretty interesting,” van Gisbergen said.

After recording his seventh straight pole position, the record equalling 13th of his season, McLaughlin struggled to get off the line again and handed the early lead to Supercheap Auto Racing’s Chaz Mostert.

An early safety car for debris on the main straight from a tyre failure on Rick Kelly’s Nissan shook things up, but it was the Red Bull Commodores that set the pace for the majority of the race. Coulthard was on a mission in the dying stages of the 52-lapper, but Whincup was too far up the road to catch, following the intense fight for the minor placings.

McLaughlin heads into the Pirtek Endurance Championship with a 12-point title lead over Jamie Whincup, 2058 points to 2046, with Coulthard on 1951. Van Gisbergen sits fourth on 1800 points, just six points ahead of Mostert.

The first of the endurance rounds, the Sandown 500 – which is also Supercars’ retro round – takes place from 15-17 September with Australia’s Great Race, the Supercheap Auto Bathurst 1000, just three weeks later.