IT doesn’t feel like all that long ago that the notion of a Jaguar SUV seemed a strange concept. Of course, we know how the market has shifted in recent years, and Jaguar now offers three SUVs.

It was clearly the right move – they actually sell, while the marque’s traditional sedans clearly, and unfortunately, don’t. This writer was certainly one of the early sceptics of a big lifted Jag, with sister company Land Rover already catering to that market.

This was way back in 2016, and I’d only just started getting published as a young, fledgling journalist. The experiences and wisdom garnered since then showed me from the very first time I drove an F-Pace, Jaguar’s first SUV model, that I was quite wrong to be worried.

Positioning itself squarely as an outright sporty alternative to Land Rover’s rugged and luxurious offerings, it became abundantly clear that Jaguar DNA was woven into it. It was in fact a driver’s car that just happened to have more ground clearance.

It really did put the ‘Sport’ in Sports Utility Vehicle, both visually and dynamically. Six years on, the SUV market has only ballooned more, and other companies have developed the know-how to make their SUVs handle and perform better as well.

That meant Jag has had some catching up to do, and catch up it has. Fresh off the back of a facelift mid-way through 2021, from the outside, it looks as though it’s got itself up off the couch and right back into shape.

The one thing most SUV makers have struggled with, quite obviously, is styling. Let’s be frank – the majority don’t look that good, with the offerings from Genesis and Land Rover being the only ones to really tickle my fancy.

Even though the updates here are minor, the F-Pace still easily remains one of the absolute best-lookers – a tiny bit of nip and tuck, some new headlights and taillights, and truly gargantuan 22-inch wheels are all it needed to look utterly modern.

To my eye, it’s a right stunner on the outside, but it’s inside where the main changes have occurred. Deservedly so too, as it was feeling not only dated, but also a bit cheap. Now, the cabin looks a whole generation newer.

The big 11.4-inch floating touchscreen stands out as a futuristic centrepiece, and the new Pivi Pro operating system looks great and is incredibly slick to use, feeling more intuitive and responsive than the InControl Touch Pro system it replaces.

The dashboard is bolder, with straighter lines and fewer curves, and the steering wheel looks far better. The materials feel like a step up, particularly in the HSE R-Dynamic version. Jag’s Windsor leather always felt amazing, so it’s great that there’s more of it here. 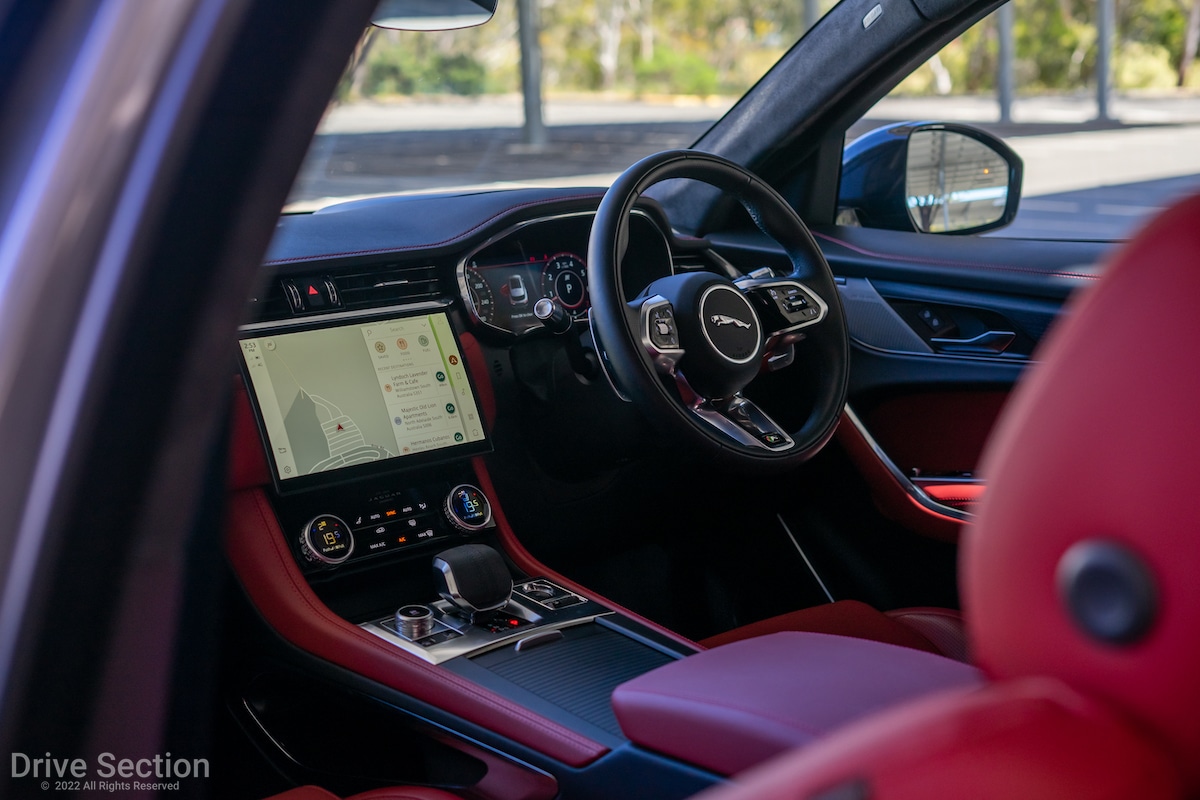 The Mars Red leather in our test vehicle is particularly striking and pairs well with the open-pore Satin Charcoal Ash trim, with a Suedecloth headliner and vastly improved plastics in the lower half of the cabin.

Although 14-way performance seats with heating and ventilation are standard, the 16-way sports seats fitted here are a no cost option and add in an amazing massage function. There’s also an excellent 13-speaker Meridian audio system.

Ergonomically, we do have a few minor qualms – the front seats don’t feel as though they’re centred between the doors and the centre console, and the back seat does feel a little cramped – but these are admittedly hang-overs from the original six-year old design.

This being the P400 model means it’s sporting Jaguar’s newest engine – the 3.0-litre ‘Ingenium’ straight-six, with a turbocharger, small electric supercharger, and a 48V mild hybrid system for a very healthy 294kW and 550Nm. 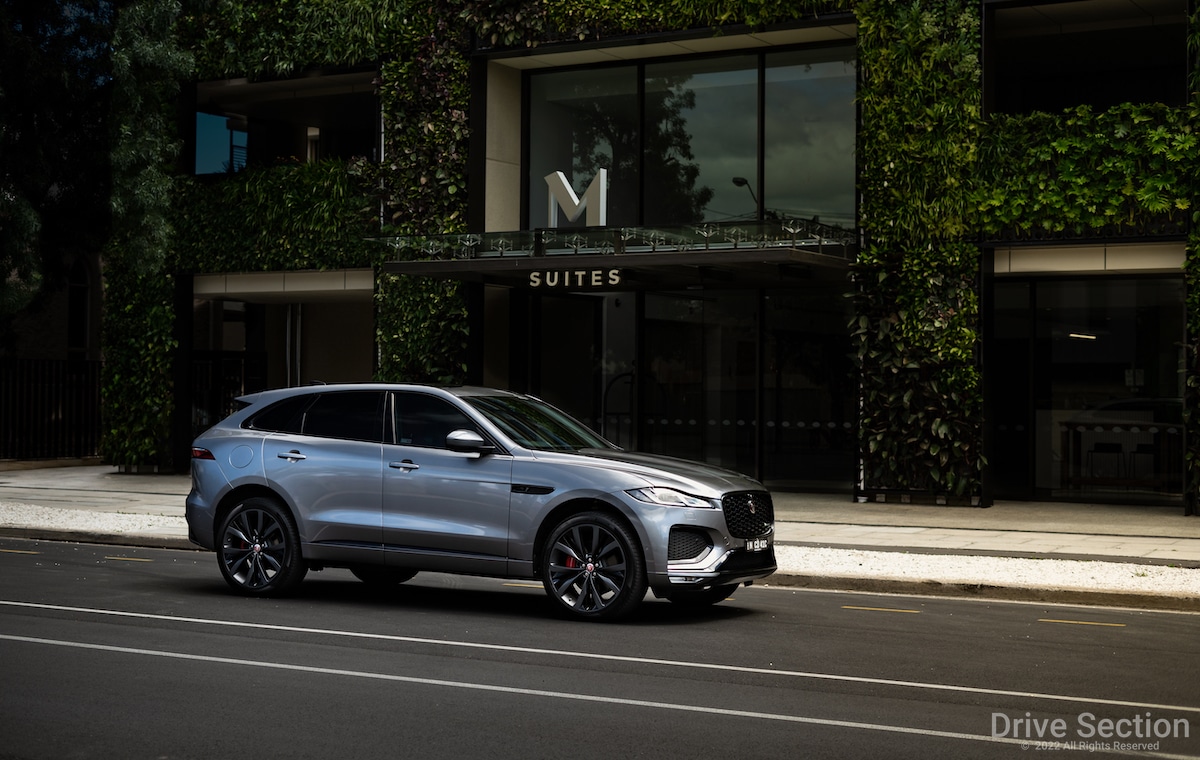 Hooked up to a ZF eight-speed automatic and rear-biased all-wheel drive, it’s good for 0-100km/h in 5.4 seconds. As we found when testing the Land Rover Defender with this same engine, it has a pleasantly relaxed character to it when you’re simply cruising around.

Not only does the engine feel incredibly smooth low-down, but the transmission is working at its best then also. Combine that with the F-Pace’s rather exceptional ride quality for a car on 22-inch wheels, and for daily driving, it’s a genuine pleasure.

Given the F-Pace’s distinctly sporty edge, however, it’s clear when you put your foot down that its sharper throttle response – only aided further by the electric supercharger – really helps it get up and go.

It continues to build speed with such ferocity once you’re in lose-your-license territory, which is seriously impressive. Peak power plateauing across the final thousand revs only makes it feel more muscular. There’s consistent pull, and a decent exhaust note too.

So it feels utterly relaxed around town and incredibly fast and buff at full-throttle, which is obviously great, but is by no means where the story ends with the F-Pace.

The thing is, where I live – with amazing but very tight driving roads, and a heavy level of policing – a car feeling smooth and progressive at mid-throttle is most important for having fun and keeping your license. This is where the Jag unfortunately falters. 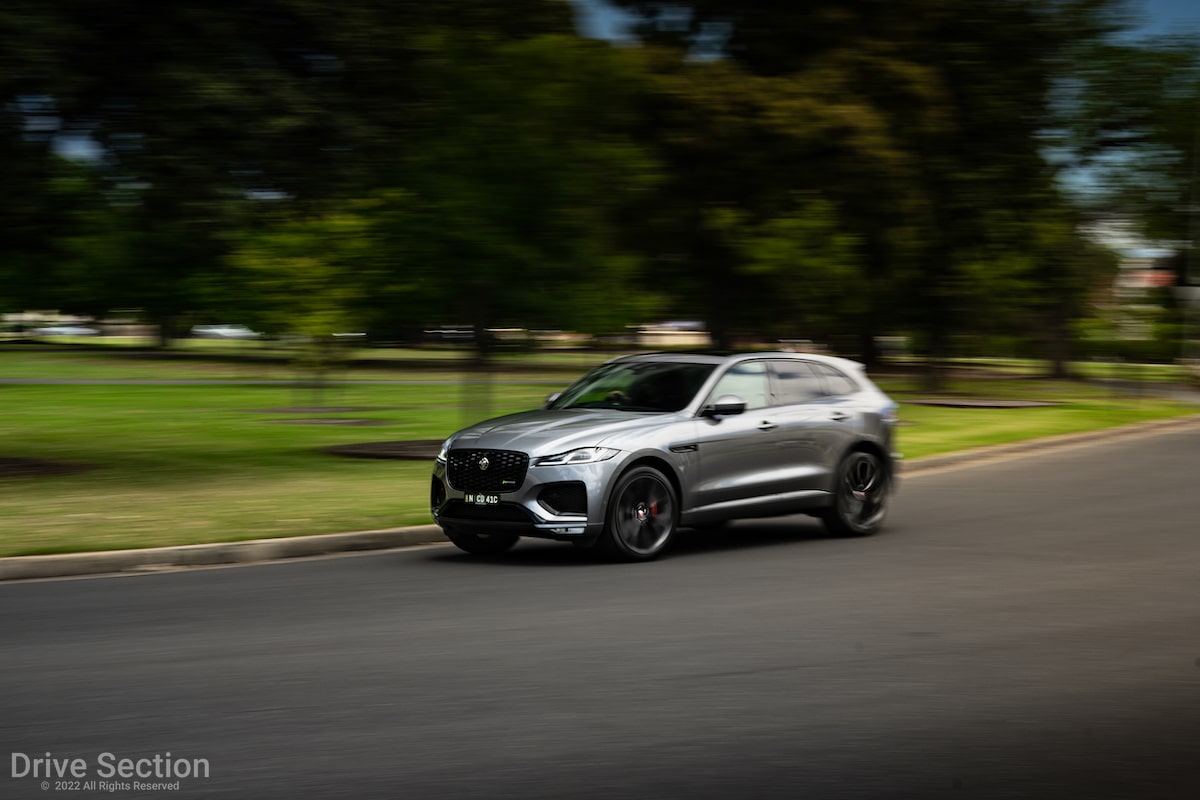 What’s exacerbated most when you try to gradually lay on the power is just how much turbo lag this engine suffers from. It’s like an old rally car – incredibly entertaining when you’ve got enough room to wait for it to wind up, but a bit frustrating in the real world.

You’d think that the electric supercharger would do a better job of filling in the gap, but the lag is just that pronounced – perhaps the key to explaining it is peak torque coming on 500rpm later than in the vast majority of other modern turbocharged engines.

The transmission also struggles to feel at its best in situations like these, with it really taking its time to swap ratios, trying to remain smooth rather than jumping into the next as it does with the throttle pinned.

Using the paddles (which are big and feel excellent) adds to the tedium, as they appear to send commands to the gearbox by snail mail. It’s surprising how bad the shift logic is, given the transmission’s exquisite performances in other vehicles, including the F-Type.

It’s something I’ve noted in the past, in the Jaguar XE, so something’s up when it comes to this latest crop of Ingenium-engined models. Of course, you can find ways to anticipate and plan around its slow downshifts, but really, you shouldn’t have to.

The F-Pace does at least still handle well, with the steering feeling nice and weighty and the adaptive dampers doing a good job of keeping it level and composed through bends, along with absorbing and ironing out the mid-corner bumps characteristic of Aussie backroads. 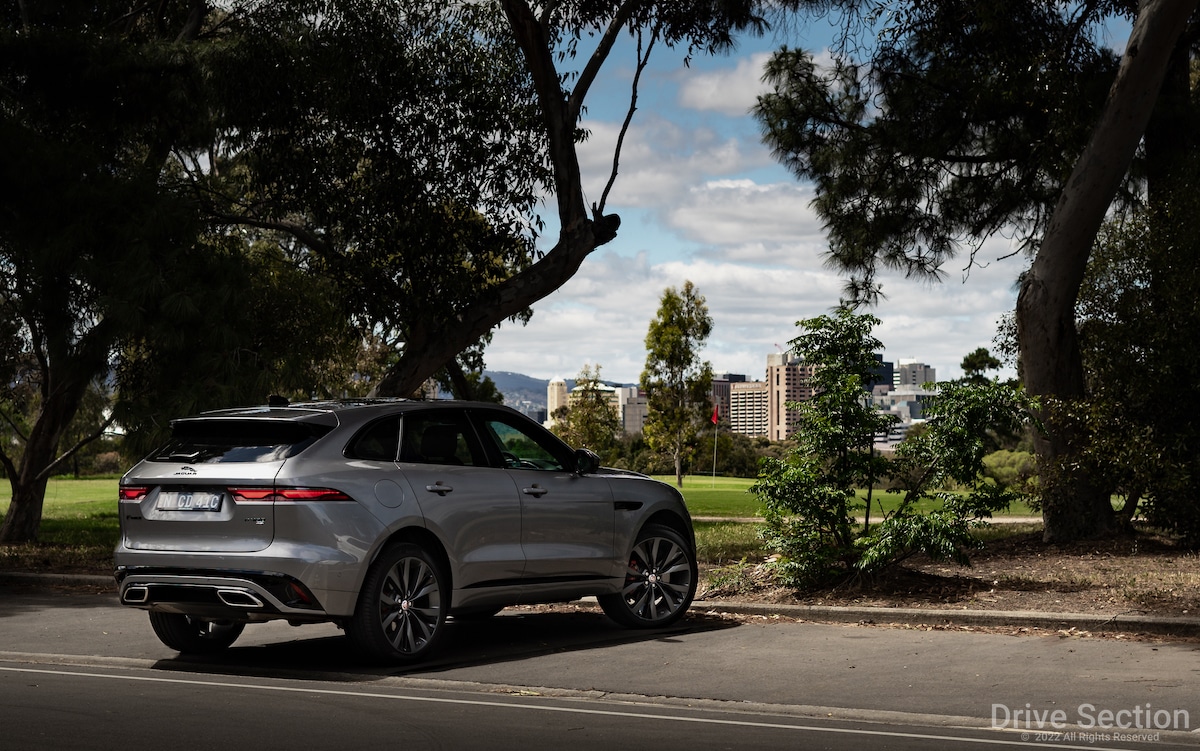 It does feel heavier through the corners than before though – perhaps not a surprise when at 2028kg, it’s more than 150kg heavier than its predecessor, the 35t S with the out-of-production supercharged V6.

This all leaves the F-Pace in a bit of an awkward spot. On one hand, it’s even more attractive than it already was, the technology and build quality has taken a truly huge step up, and this new engine is monstrously powerful yet incredibly relaxed.

On the other, it’s not as responsive, nor does it feel as athletic, carrying that extra heft around. With some revisions to its driveline tuning to prioritise responsiveness and smoothness at all degrees of throttle input, it really would be ticking all the right boxes.

For the majority of buyers, none of this will be an issue, of course. If you love the looks and the interior as much as we do, and you’re only really going to be cruising around town or on the open road in this, it’ll be sublime.

It’s just that if you’re like me and you want to enjoy a good backroad, that the 2022 F-Pace might frustrate a touch. You can get on and build your own at the Jaguar Australia website, or check out PriceMyCar for the best deal.

This article originally appeared on drivesection.com and has been republished with permission. Photography by Marcus Cardone. Our test vehicle was provided by Jaguar Land Rover Australia. To find out more about the Jaguar F-Pace, contact your local Jaguar dealer.