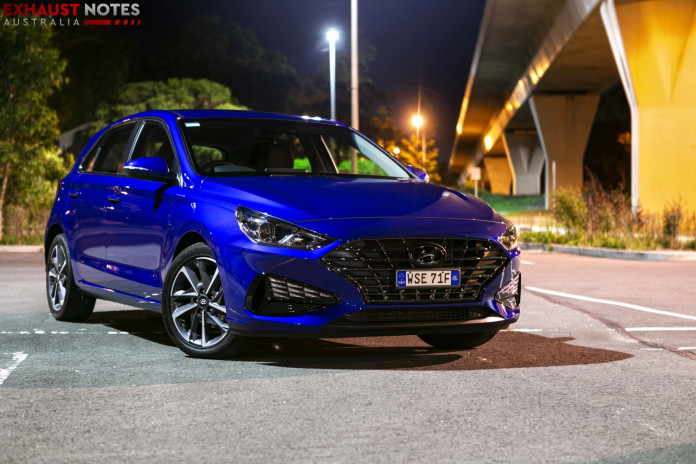 HYUNDAI continues to offer a reliable and sturdy competitor to the likes of Toyota’s Corolla and the Mazda3 with the refreshed 2021 Hyundai i30 Active and Elite hatchbacks, and it’s no wonder they’re often on the best-seller list.

Side by side, they are, like the new sedans, the same, with the only visual difference being the wheels. Both variants sport new triangular shaped, LED daytime running lights which double as indicators, and halogen headlights.

Inside, you’ll find some minor differences between the two spec levels, and mostly in the entertainment and technology aspects of each car. For example, the Active hatch gets an 8.0-inch infotainment system, while the Elite scores a swanky 10.25-inch offering.

That larger unit also has a lot more features, including dual zone climate control, and satellite navigation. Android Auto and Apple CarPlay is standard across the range though. Both models also get leather appointed seats, which in our books is a bonus.

Let’s face it, there aren’t many entry-level cars that come with these features as standard. What’s more important though, is that both models are an absolute pleasure to drive, but are oddly, slightly stiffer and noisier than the sedan versions.

That said, the hatch variants feel more alive and gruntier than the sedans too, despite sharing the same 2.0-litre inline 4-cylinder engines, mated to the same 6-speed automatic transmissions, and producing the same 120kW and 203Nm.

Interestingly, the steering in both the Active and Elite seemed quite moody. Especially noticeable at lower speeds, it would become suddenly and surprisingly heavy, regardless of which of the three driving modes we were using.

Our test vehicles were driven mostly on the highway, so we were able to achieve lower mileage than Hyundai’s claimed 7.4-litres/100km, including an impressive 7.1-litres/100km in the Elite variant.

But let’s face it, you’re not reading about the Active and Elite hatchbacks because you’re interested in power figures, otherwise you’d be reading our review on the N-Line, or even the N.

You’re here because you want to know if either hatch is worth your hard-earned money. The simple answer is yes. The i30 range offers simplicity, combined with practicality and reliability. Both variants ae also available in a range of six colours.

Prices start from $26,920 for the Active and $30,220 for the Elite, plus on-roads in both cases. Manual transmission is available only in the base i30 hatch which is neither the Active or the Elite spec.

For such a small car, there’s plenty of storage space available. Headroom and legroom isn’t an issue either, with four people able to sit comfortably. There’s 395-litres of boot space, which can be extended to a massive 1301-litres with the second row folded down.

There’s two cup holders in the centre console as well as provisions for keys or a wallet, and a small storage compartment underneath the climate controls which, also reveals USB charging ports.

There’s a fairly deep centre console as well, and another two cup holders in the second row. If you’re still not sold, then there’s the quality safety technology underneath all of it.

Apart from that, the i30 range scored a 5-star ANCAP rating from 2017 and holds onto each star into 2021. Aside from minor differences between both variants, the Elite trumps the Active only due to small conveniences that you may regret not having later.

Things such as having a smart key or having an Infinity 7-speaker sound system. In a nutshell though, the i30 hatch is a great car for new and young drivers, or even older veteran drivers that just want to kick back and let the car do all the work.

They’re an affordable and practical first car, or even as a daily run-around. Hyundai offer a 5-year unlimited kilometre warranty across its entire range. If you’re looking for something small, practical, reliable and affordable, then the i30 hatch is waiting for you.

Our 2021 Hyundai i30 Active and Elite hatches were supplied by Hyundai Australia. To find out more, contact your local Hyundai dealer. Pictures courtesy of J_Hui Design/Photography.

Paul Pascual
Paul Pascual is an avid enthusiast of all things JDM, from the legendary powerhouses to the old school kei cars. He has a passion for modification and making his cars look like they belong on the track. But they never actually make it there.