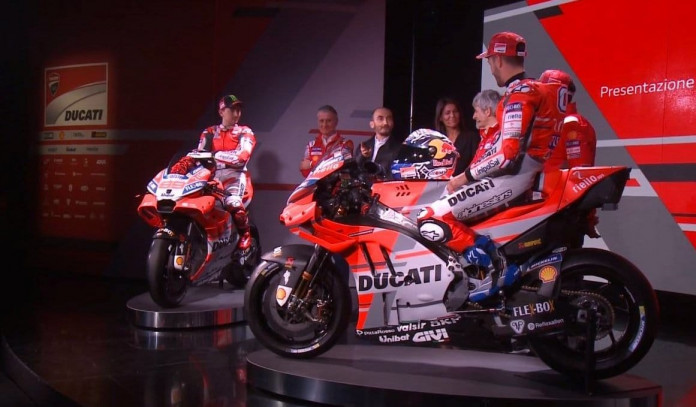 DUCATI Corse has unveiled its 2018 MotoGP challenger in a live-streamed global event, the Desmosedici GP18, complete with a new look livery, to be ridden by Andrea Dovizioso and Jorge Lorenzo.

The Italian manufacturer revealed its revised colour scheme, which now features grey panels to go with its traditional red and white look, along with its new edition of the V4 Desmosedici it will campaign.

Dovizioso heads into season 2018 as one of the favourites for the championship, after taking the title race to the wire against Marc Marquez last year, while Lorenzo is looking to rebuild his career, having left Yamaha after nine seasons to join Ducati last year.

Final tweaks are expected to be made to the bike’s design ahead of the 2018 MotoGP season, at the official test at the Sepang International Circuit in Malaysia, later this month.

Further testing will be held in Thailand in February and Qatar in early March, ahead of race one of the 19 race season, to be held in Qatar on 18 March. The Australian Motorcycle Grand Prix will be held on 28 October at Phillip Island.